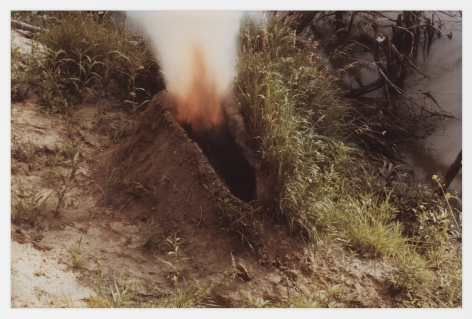 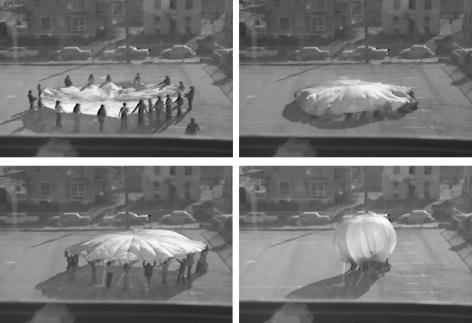 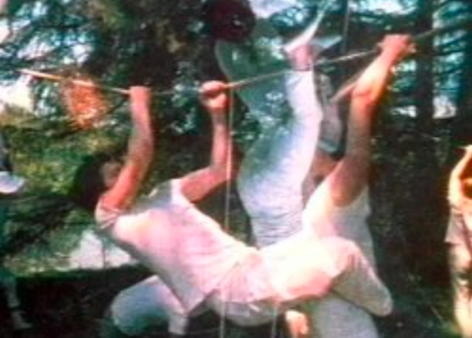 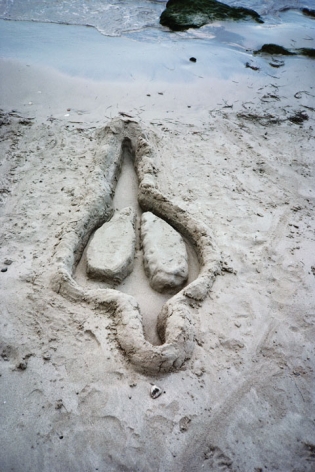 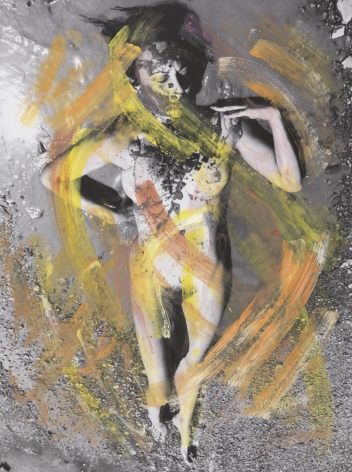 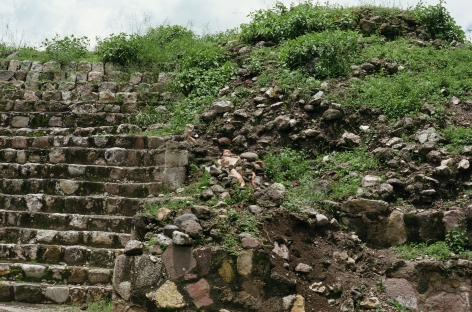 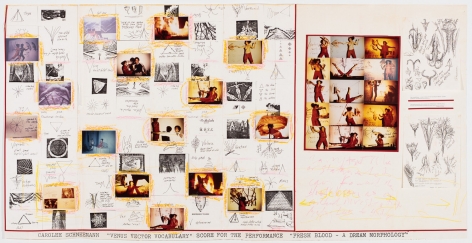 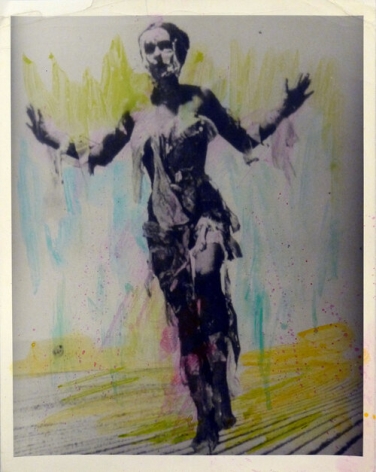 “These obsessive acts of re-asserting my ties with the earth are really a manifestation of my thirst for being.” — Ana Mendieta

Galerie Lelong & Co. and P·P·O·W present Irrigation Veins: Ana Mendieta and Carolee Schneemann, Selected Works 1966 – 1983, an online exhibition exploring the artists’ parallel histories, iconographies, and shared affinities for ancient forms and the natural world. Galerie Lelong and P·P·O·W have a history of collaboration and have co-represented Carolee Schneemann since 2017. This will be the first time the two artists are shown together in direct dialogue, an exhibition Schneemann proposed during the last year of her life. In works such as Mendieta’s Volcán (1979) and Schneemann’s Study for Up To and Including Her Limits (1973), both artists harnessed physical action to root themselves into the earth, establishing their ties to the earth and asserting bodily agency in the face of societal restraints and repression.

Both artists identified as painters prior to activating their bodies as material; Mendieta received a MA in painting from the University of Iowa in 1972, and Schneemann received an MFA from the University of Illinois in 1961. Separately, the artists came to the realization that the static nature of painting was insufficient for what their work needed to accomplish. Mendieta explained, “The turning point in art was in 1972, when I realized that my paintings were not real enough for what I want the image to convey and by real, I mean I wanted my images to have power, to be magic.” For Schneemann, who continued to identify as a painter, it was about how to be both “the image and image-maker” and move beyond the confines of the canvas by “breaking the frame.”

When Mendieta and Schneemann finally met in New York in the late 1970s, they had already produced a relay of shared trajectories. In their lifetimes, they were included in numerous publications and exhibitions together including: Lucy Lippard’s “The Pains and Pleasure of Rebirth: European and American Women’s Body Art” in Art in America, 1976; Lippard’s “Quite Contrary: Body, Nature, Ritual in Women’s Art” in Chrysalis, 1977; and Gloria Orenstein’s “Reemergence of the Archetype of the Great Goddess in Art by Contemporary Women” in Heresies, 1978. They both exhibited in Contact: Women and Nature at the Greenwich Library, Greenwich, Connecticut, 1977, and both artists exhibited their works at A.I.R. Gallery and Franklin Furnace. Both had solo exhibitions at A.I.R.: Mendieta in 1979 and 1981 and Schneemann in 1980. At Franklin Furnace, Mendieta presented La Noche, Yemaya in 1978 and Body Tracks in 1982; Schneemann presented ABC – We Print Anything – In the Cards in 1976 and Homerunmuse in 1979.

The works presented touch on the artists’ shared interest in temporal duration, endurance, renewal, saturation of material, and the transformation of the body. In Schneemann’s Study for Up to and Including Her Limits, we see the artist mid-flight in a tree surgeon’s harness. This spontaneous action came from Schneemann’s need to “occupy a place of visual simultaneity, to bring forward evidence of changing multiplicity” within the landscape. In Mendieta’s Volcán, we find a parallel instinct. Mendieta sculpted a female figure with earth, then activated the bodily form with gunpowder. This alchemical reaction ritualistically tied the form in the earth to the sky invoking the spirit of renewal between the earth, sky, and the feminine archetype.

Through the works Venus Vector Vocabulary (c.1981 – 83) and Burial Pyramid (1974), we see the artists’ separate paths of investigation into histories of lost archetypes. When speaking at a panel about Mendieta in 2011, Schneemann explained, “So for both of us, it seems there is a phylogeny that recapitulates mythology. It is the sense that there are certain energies and momentums that will be opened and coincidentally discovered and explored: so here’s the explicit body taking the deeper roots of genital sexuality into the recognition of forms of nature, and how we would interact and inhabit those forms of nature.”

Ana Mendieta (1948 – 85) was born in Havana, Cuba, and was exiled to the United States in 1961 with her sister, Raquelín Mendieta. She lived and worked in Iowa, New York City, and Rome. In addition to a MA, Mendieta also received an MFA from the University of Iowa in 1977. She created groundbreaking work in photography, film, video, drawing, sculpture, and site-specific installations. Mendieta’s work has been the subject of seven major museum retrospectives; the most recent was the groundbreaking exhibition of her moving image works, Covered in Time and History: The Films of Ana Mendieta, which was produced by the Katherine E. Nash Gallery, University of Minnesota in 2016; the exhibition traveled to two additional national venues as well as three international museums. Forthcoming solo presentations include Blood Inside Outside, Baltimore Museum of Art; Ochún, Cleveland Museum of Art; and Suspended Fire, Denver Art Museum. Galerie Lelong has been the exclusive representative of the Estate of Ana Mendieta since 1991.

Carolee Schneemann (1939 – 2019) activated the female nude with a multidisciplinary practice that spanned sixty years and included painting, assemblage, performance, and film. She received a B.A. in poetry and philosophy from Bard College and a Master of Fine Arts from the University of Illinois. Originally a painter in the Abstract Expressionist tradition, Schneemann was uninterested in the masculine heroism of New York painters of the time and turned to performance-based work, primarily characterized by research into visual traditions, taboos, and the body of the individual in relation to social bodies. Although renowned for her work in performance and other media, Schneemann began her career as a painter, stating, "I'm a painter. I'm still a painter and I will die a painter. Everything that I have developed has to do with extending visual principles off the canvas." Schneemann has exhibited worldwide, at institutions including the Los Angeles Museum of Contemporary Art; the Whitney Museum of American Art and The Museum of Modern Art, New York; the Centre Georges Pompidou, Paris and the Reina Sofia Museum, Madrid. The comprehensive retrospective, Carolee Schneemann: Kinetic Painting organized by the Museum der Moderne Salzburg, Austria (2015) traveled to the Museum fur Moderne Kunst,  Frankfurt,am Main, Germany (2017) and PS1 MoMA, New York (2018).  Taking the influential work of the late American artist as a point of departure, Up to and Including Limits: After Carolee Schneemann curated by Sabine Breitwieser opened December 2019 at Muzeum Susch, Switzerland and is on view through June 2020. 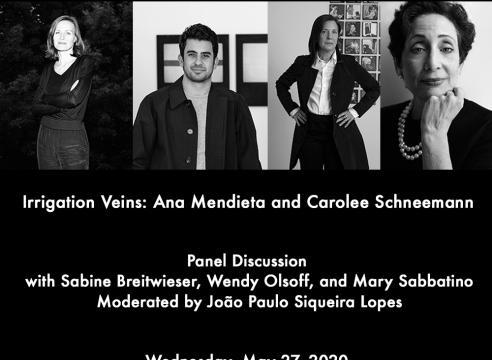