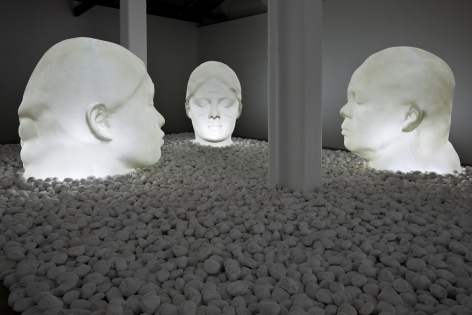 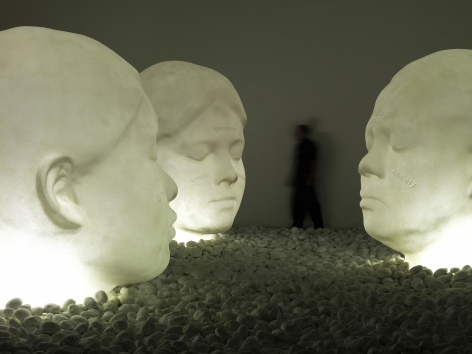 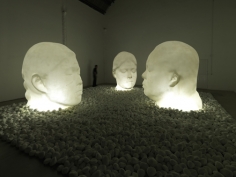 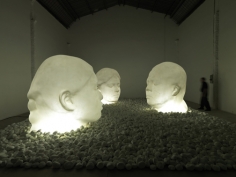 Three resin heads of women, illuminated from within with white neon and rising out of a blanket of white marble stones covering the floor, make up the central work in Jaume Plensa's upcoming exhibition In the Midst of Dreams at Galerie Lelong. The exhibition will open to the public on Thursday, September 10 from 6 to 8 pm. The artist will be present.

Since Plensa's last exhibition at Galerie Lelong in 2006, he has been exploring the idea of what portraiture means in an increasingly diverse world community. Using computers, Plensa begins from a true subject from life, often a woman, and then alters her face so that race and sometimes gender are indeterminate. As in his series Soul, previously exhibited at Galerie Lelong, Plensa works the form to find a commonality expressing the inner presence that emanates from every man and woman. The heads are overlaid with texts related to various states of being. In one, Plensa refers to a text Oscar Wilde wrote in prison, detailing the abusive punishments of hunger, insomnia, and disease that were prevalent. The references to these emotional and physical deprivations express a darker side of the human condition.

By contrast, a related series of alabaster heads emanate a serene presence. The works bear female faces that emerge softly from within the stone. For these sculptures, Plensa used a photographic source and laser-cut stone, uniting a craft that goes back to Classical Greece

with 21st-century technology. In the Midst of Dreams expresses Plensa's vision of a universal, global humankind, where race and nationality are superseded by a common need for spirituality and dreams.