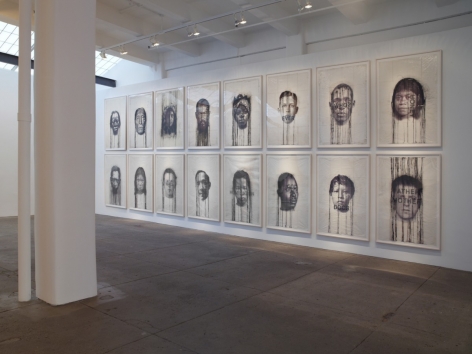 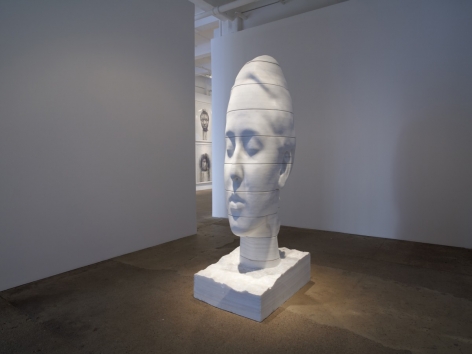 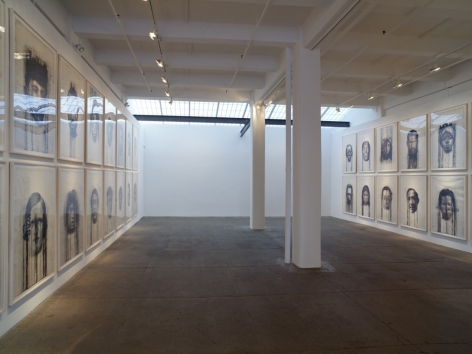 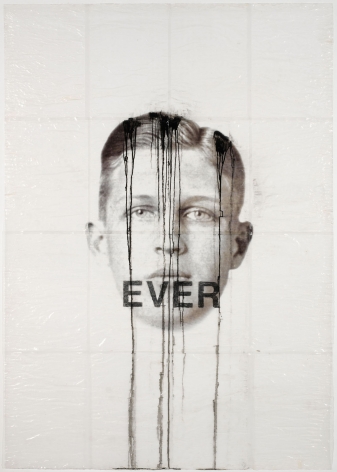 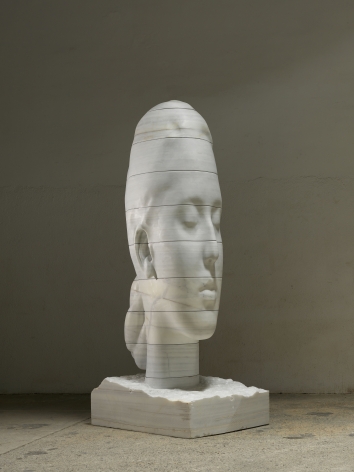 Though known mainly for his sculptures, installations, and public works, Plensa has also been prolific in works on paper throughout his career. A N O N Y M O U S will feature a series of 40 mixed media portraits on paper that were recently exhibited in a solo exhibition at the Musée Picasso in Antibes, France last year. Representing a vast range of ages and racial and ethnic backgrounds, the series reflects the diversity of the city. With their faces slightly obscured and captured in neutral, indistinct expressions, the works feel more like memories made tangible, rather than traditional portraiture. Printed across each figure is a word—among them, “innocence,” “desire,” and “divinity”—that refers to universal states of consciousness.

In a way, the title of the exhibition contrasts with the specificity of the portraits—unlike many of Plensa’s subjects, the figures are identifiable with defined traits. However, a hallmark of Plensa’s is uniting classic visual and literary references with modern materials and concerns to achieve a sense of collective being and timelessness. While looking at the portraits, one feels an awareness of shared truths and an innate connection with the people depicted.

Also on view will be Humming, a large, marble sculpture that bears the deliberately generalized appearance seen throughout Plensa’s other work.

With features elongated and softened, references to gender, race, and age are diminished. The figure’s eyes are closed, in a contemplative or dream state. Plensa creates these works by altering images of individuals to generalize their characteristics and then using 3D photographic technology to produce a model for the sculpture. In Humming, Plensa for the first time uses layers of lead within the marble to segment his figure, representing the fractions of a person’s inner self.

Concurrent with A N O N Y M O U S is Jaume Plensa: Echo, on view at Madison Square Park from May 5 to August 14. A 44-foot-high sculpture of marble, plastic, and fiberglass, Echo takes its name from Greek mythology but is modeled after a young girl known to the artist. Rising from the center of the park with her eyes closed, and luminous in both day and night, Echo will be a source of tranquility amid the hectic city. It is the artist’s hope that viewers will see the sculpture as a mirror into their own thoughts and soul.

Plensa was born in 1955 and currently lives in Barcelona. His work has been the subject of numerous monographic museum shows—most recently, Genus and Species at the Nasher Sculpture Center in Dallas and a monumental exhibition at the Yorkshire Sculpture Park in West Britton, UK, currently on view through September 25. Plensa is also highly active in developing site-specific public works—his most celebrated include Crown Fountain in Chicago; Breathing at the BBC Headquarters, London; Bridge of Light, Jerusalem; and World Voices at the Burj Khalifa in Dubai. Plensa is currently working on a major work for Calgary’s highly anticipated building The Bow, which will open in 2012.