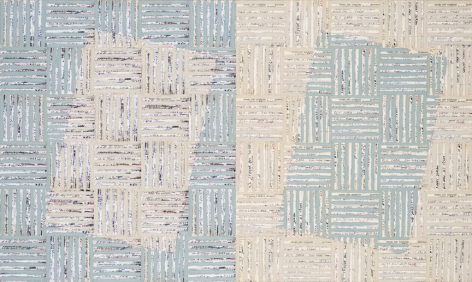 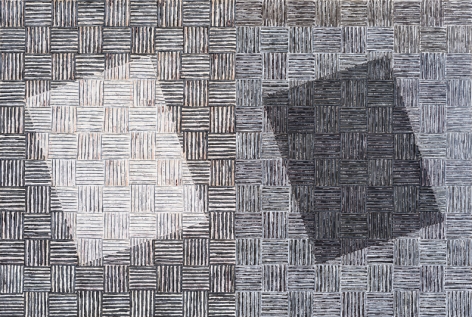 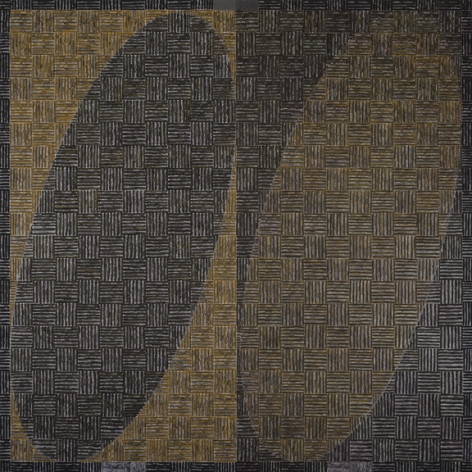 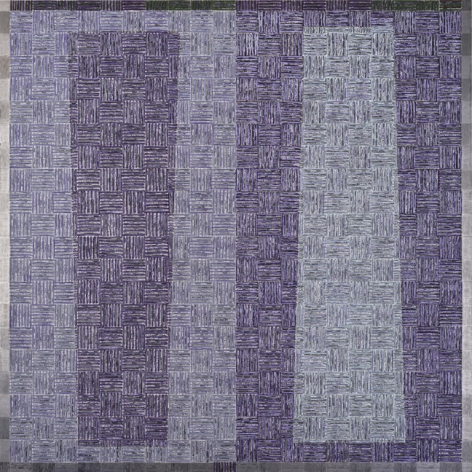 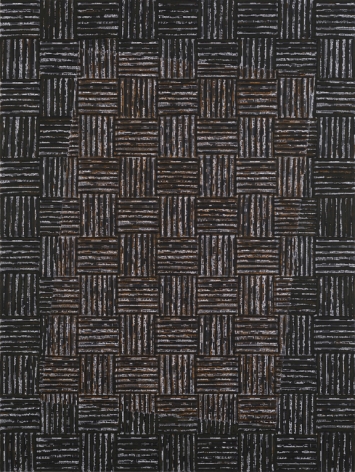 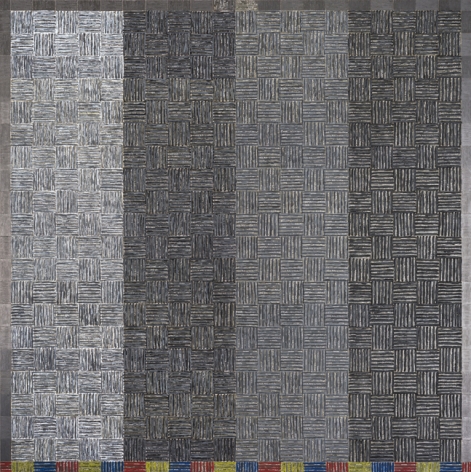 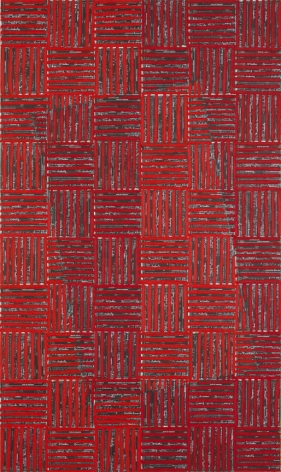 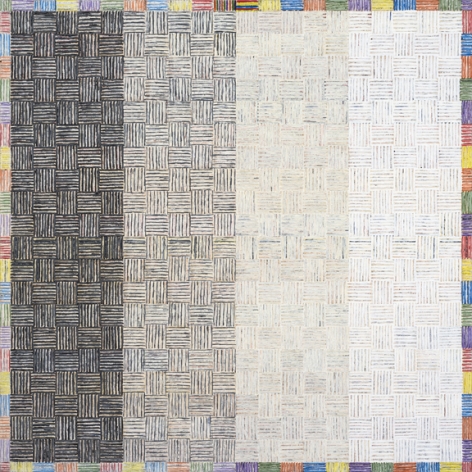 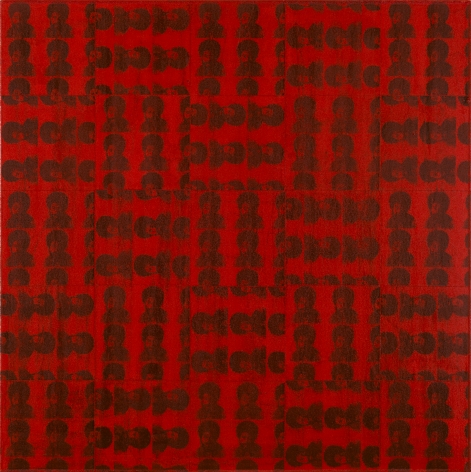 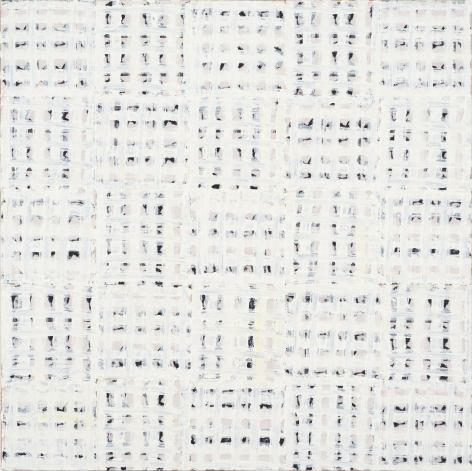 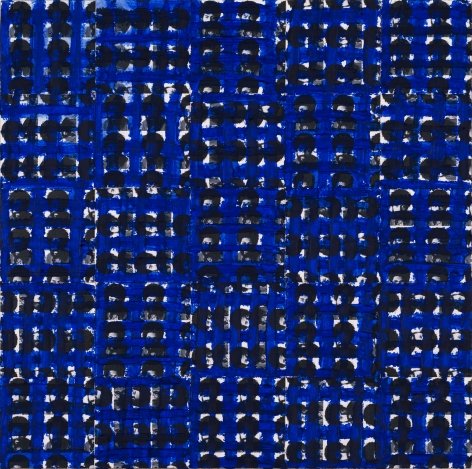 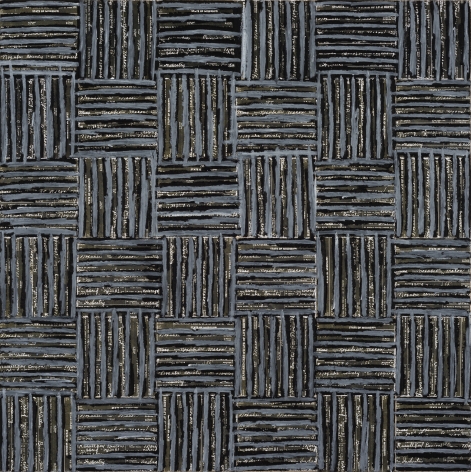 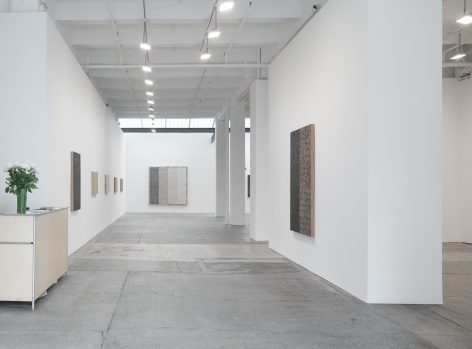 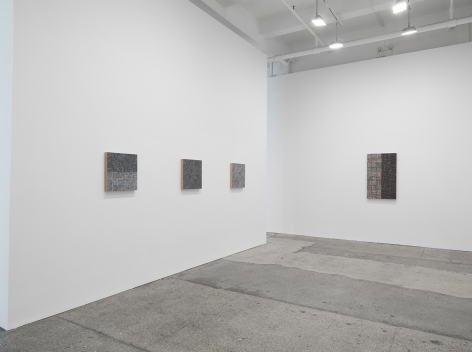 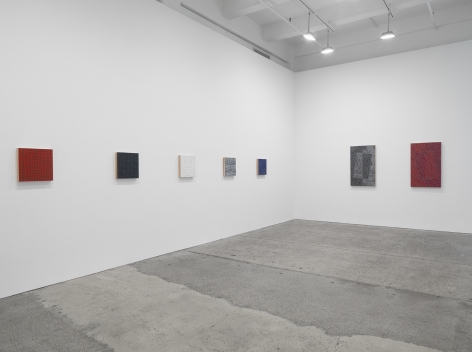 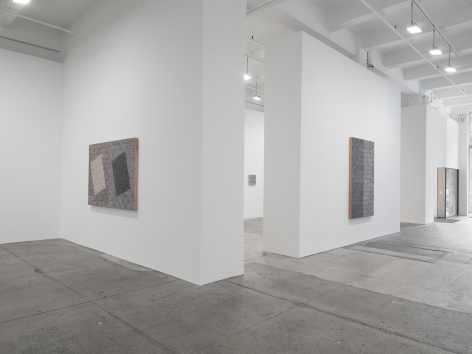 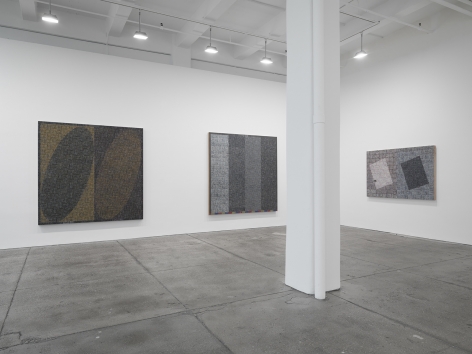 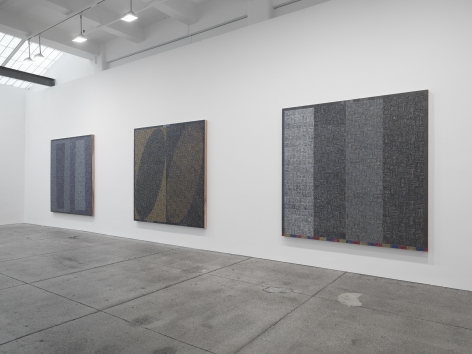 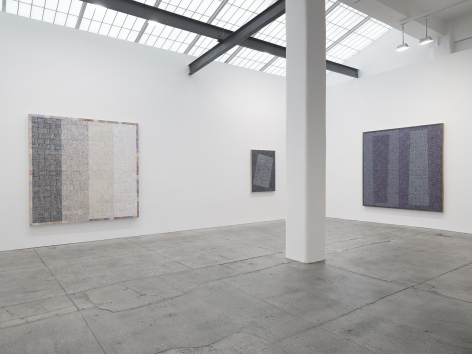 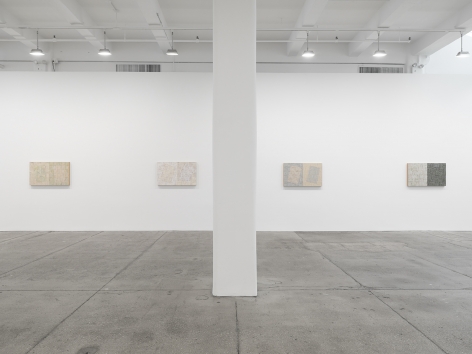 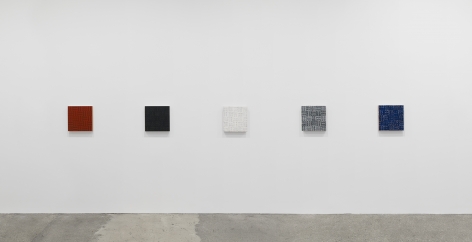 Galerie Lelong is pleased to present a solo gallery exhibition in New York of Chicago-based artist McArthur Binion: Re:Mine. The artist will be present for the opening reception at the gallery on Thursday, September 10 from 6-8pm.

Re:Mine refers to the artist’s practice of both hiding and excavating biographical information in his paintings, claiming and reclaiming personal and cultural history. Copies of the artist’s birth certificate and pages from his address book are physically laid down as a self-described “under surface” of the paintings on which he applies multiple layers of paint stick in vertical and horizontal strokes. This “woven” application of paint, with black and other deep colors like umber, still permits residual images of the printed page to be seen in ghostly patterns. The accumulation of stroke after stroke of paint stick becomes a metaphor for artistic and manual labor and visually mediates between what is visible and invisible.

Though Binion’s work shares many tenets with the canons of Modernism — and particularly Minimalism — he subverts the dominant rigid notions of the avant-garde by extracting images and rhythms from varied sources including personal narrative, jazz music, and memory. “The part I took from Minimalism,” Binion said, “is that you want to do your own stuff in your own image.” Equally important to Binion is the integration of personal “DNA,” which is evident in the choice of birth certificate and the long history of artistic colleagues, art world luminaries and friends, living and deceased, glimpsed in the pages of the address book.

Early on Binion found his way to abstraction via drawing the body. The process of applying the surface is laborious and time consuming, recalling the manual labor of his youth and its landscape. Binion has described this as “an intangible and performative approach to making art.” For Binion, abstraction is not a fixed code, but an immensely mutable system in which questions of identity, birth, and existence can be examined and resolved, or left open to mystery.

Binion’s new paintings continue his DNA series, begun in 2013. Identity and the artist’s history is inscribed in the paintings not only via the traces of birth certificates and names from

his address book but also through the physicality of the painting process and proportions that mimic the artist’s body. In DNA: Black Painting: I, the painting is divided into four equal vertical parts, each width roughly corresponding to the width of the artist’s thin body. These strong verticals contrast with the vibration of grids and traces of the artist’s handwriting from the address book pages. The obsessive movements of the artist’s hand and the fluid motion of hand writing as well as the size of the painting define DNA in numerous ways. Asserting presence may be a given for many, but for Binion, and other African American artists of his generation, the artist’s presence and their experience was often defined by absence. For this reason, another symbol in Binion’s work is the inclusion of his own self portrait. The source of this image is a photograph from 1971. It is reproduced in both horizontal and vertical lines, in serial format, introducing personal and emotional data in the language of Minimalism.

Though Binion’s over forty year investigation of abstract painting has been continual, his work was not widely seen until several years ago. Born in Mississippi in 1946, Binion lived in New York in the ‘70s and was loosely part of a group of African American painters who, despite the pressures to make artwork that was politically motivated, devoted themselves to abstraction. In 1973, he was included in the second show held at Artists Space organized by Sol LeWitt, Carl Andre, and Ronald Bladen. Binion’s distinctive insertion of narrative and personal history and his emphasis on content, distinguished his work from the more reductive Minimalist practices of other artists and continues to do so today. In 2012, the Contemporary Art Museum, Houston, hosted a solo show of Binion’s work, and he has participated in numerous group exhibitions including Prospect.3, New Orleans, in 2014. Binion’s work is held in multiple museum collections including the Metropolitan Museum of Art. Binion taught as a professor of art at Columbia College in Chicago from 1992 through 2015 and has exhibited at Kavi Gupta since 2013. In connection with the exhibition, Galerie Lelong will publish a catalogue, with essays by Franklin Sirmans and Lowery Stokes Sims.