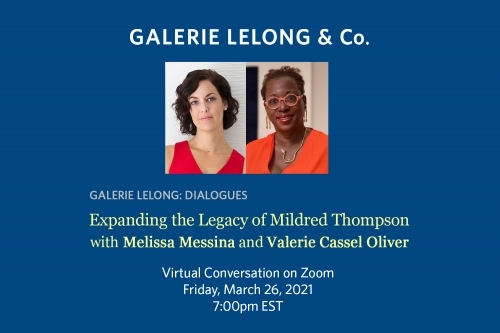 We are pleased to present the fourth conversation "Expanding the Legacy of Mildred Thompson" in our series "Galerie Lelong: Dialogues" held on occasion of Mildred Thompson's solo exhibition Throughlines, Assemblages and Works on Paper from the 1960s to the 1990s (February 18 – March 27, 2021).

Join Melissa Messina in conversation with Valerie Cassel Oliver, the Sydney and Frances Lewis Family Curator of Modern and Contemporary Art at the Virginia Museum of Fine Arts (VMFA) about the art of Mildred Thompson. They will discuss the contextualization of Thompson’s work in the groundbreaking 2017 exhibition Magnetic Fields: Expanding American Abstraction, 1960s to Today, Thompson's abstract practice in relation to contemporaries such as Howardena Pindell and Mary Lovelace O’Neal, and the placement of her Wood Picture in the forthcoming exhibition The Dirty South: Contemporary Art, Material Culture and the Sonic Impulse scheduled to open May 22, 2021 at the VMFA.

Melissa Messina is an Independent Curator, Curatorial Advisor, and Curator of the Mildred Thompson Estate. For over 15 years, her exhibitions, site-responsive projects, and public programs have been presented in cultural institutions throughout the U.S. and abroad. She was recently the co-curator of “Mildred Thompson, The Atlanta Years, 1986-2003” at Spelman College Museum of Fine Art, Atlanta, GA (2019), and “Mildred Thompson: Against the Grain,” at the New Orleans Museum of Art, LA (2018). In 2017, Messina co-curated “Magnetic Fields, Expanding American Abstraction, 1960s to Today,” an intergenerational exhibition celebrating abstraction by 21 Black female artists – including Mildred Thompson – that toured from Kemper Museum of Contemporary Art in Kansas City to the National Museum of Women in the Arts, Washington, D.C. She was formerly the Interim Executive Director and Senior Curator of the SCAD Museum of Art, Savannah, GA; the National Program Director for ArtTable, NY; and a founding staff member and then guest curator at the Elizabeth A. Sackler Center for Feminist Art at the Brooklyn Museum. Her research on Black female abstract practitioners has been funded by Creative Time | Warhol Foundation, the Stuart A. Rose Library at Emory University, and the Crystal Bridges Museum of American Art, Bentonville, AR.

Valerie Cassel Oliver is the Sydney and Frances Lewis Family Curator of Modern and Contemporary Art at the Virginia Museum of Fine Arts. Prior to her position at the VMFA, she was Senior Curator at the Contemporary Arts Museum Houston (2000 – 2017). She has served as director of the Visiting Artist Program at the School of the Art Institute of Chicago (1995-2000) and a program specialist at the National Endowment for the Arts (1988-1995). In 2000, she served as one of six curators selected to organize the Biennial for the Whitney Museum of American Art.

Her 2018 debut exhibition at the Virginia Museum of Fine Arts was a 50-year survey of work by Howardena Pindell entitled, Howardena Pindell: What Remains to be Seen. The exhibition, co-organized with Naomi Beckwith, the Manilow Senior Curator at the Museum of Contemporary Art Chicago, was named one of the most influential of the decade. Most recently, Cassel Oliver organized the exhibition, Cosmologies from the Tree of Life that featured over thirty newly acquired works from the Souls Grown Deep Foundation. She is currently developing the group exhibition, The Dirty South: Contemporary Art, Material Culture and the Sonic Impulse, scheduled to open at the VMFA May 22, 2021.

Cassel Oliver is the recipient of a Getty Curatorial Research Fellowship (2007); a fellowship from the Center of Curatorial Leadership (2009); the High Museum of Art’s David C. Driskell Award (2011); the Arthur and Carol Kaufman Goldberg Foundation-to-Life Fellowship at Hunter College (2016) and the James A. Porter Book Award from Howard University (2018). From 2016-17, she was a Senior Fellow in Curatorial Studies at the School of the Art Institute of Chicago. In Spring 2020, she served with Hamza Walker as a Fellow for Viewpoints at the University of Texas at Austin.

Cassel Oliver holds an Executive MBA from Columbia University, New York; an M.A. in art history from Howard University in Washington, D.C. and, a B.S. in communications from the University of Texas at Austin.